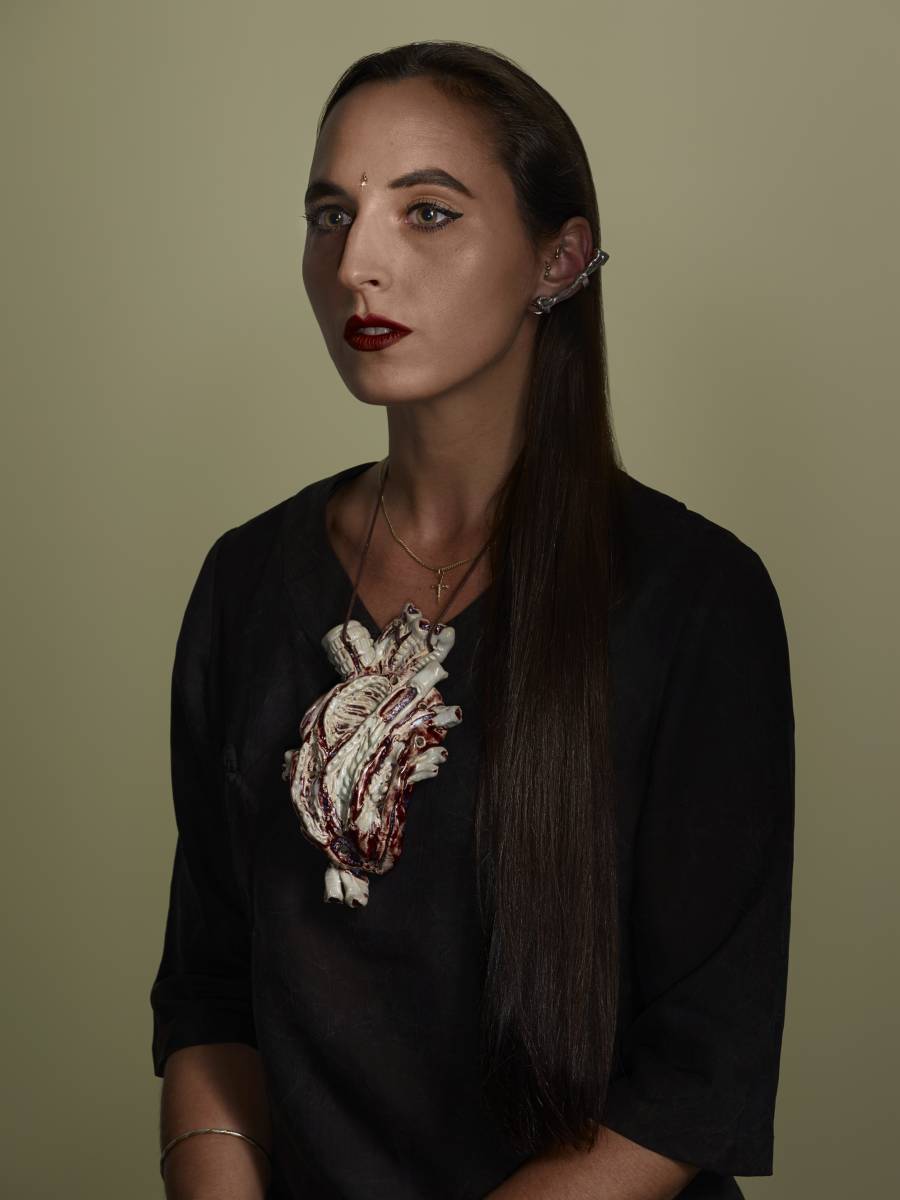 Born in Paris in 1986, Charlotte Cornaton was trained in the art of ceramics at the Central Saint Martins School in London in 2008 where she was mentored by Anthony Quinn. In 2009, she graduated top of her class from the École supérieure d’arts graphiques (Esag) Penninghen in Paris.

‘INSOMNIO’ is a collection of sculptural porcelain books inspired by the artist’s oniric life and its symbolism using Jung dream interpretation. Presented on patinated steel lecterns, lit by hidden LEDs, these porcelain books were each handmade by Charlotte Cornaton during her residency at the famous historic workshops of Jingdezhen, China. The artist used the three main ancestral Chinese techniques of incised porcelain: celadon glaze, a porcelain engraving skill; cobalt calligraphy, a porcelain painting method; and cloisonné glaze. The collection includes table and wall lighting pieces with dimmers. ’’INSOMNIO is the library of my nightmares and their symbolism. Each book refers to a specific oniric moment using Jung dream interpretation.’’ ‘INSOMNIO’ thus uses Oriental know-how to express the artist’s Western form of thought, incarnating the exchange and symbiosis of cultures.

‘CHAKRAS’ are glass and ceramic sculptures that resemble natural crystals and minerals. In Hindu traditions, chakras are believed to be the meeting points of the energy channels in the metaphysical body. Each ‘CHAKRA’ sculpture refers to a mineral linked to one of these energy points, translating the artist’s passion for the body in a spiritual context. Honed with acute precision, these sculptures are open fragments of reality that nevertheless remain enigmatic, as if they were apparitions from the realm of hallucination.

Visual artist and video maker, Charlotte Cornaton works in a transcultural spirit through video and ceramics to address social issues such as contemporary vanitas, criticism of appearances or femininity. These two media, one ancestral and the other contemporary, are fused in Charlotte Cornaton’s work. Sculptural porcelain costumes can be worn during a filmed performance, or ceramic can be animated in stop motion. Since 2010, Charlotte Cornaton annually participes in the ‘Chambres à Part’ group exhibition curated by Laurence Dreyfus as part of the private Fiac itinerary. In 2012, during her residency at the European Ceramics Work Centre (EKWC) at S’Hertogenbosch in the Netherlands, she produced ‘Corpus Femina,’ a project involving three ceramic costumes about femininity. ‘Corpus Femina’ was presented in the Musée Magnelli for the XXIIIrd “Biennale internationale de la céramique et création contemporaine” in Vallauris, France in July-November 2014.